Development of rehabilitative neuroprosthetics require recording of neuronal signals reliably for long periods of time. While innovative developments of high-density microelectrode probes have enabled the recording of signals from large neuronal ensembles, the current systems have been unable to access such signals for more than several years. Our lab combines abiotic, biotic, and functional perspectives to explain underlying mechanisms governing the effects of chronic electrode implantation leading to performance degradation and electrode failure. Since electrode failure is multi-factorial in nature, we intend to develop ways to mitigate each of those failure modes to build better microelectrodes. On the abiotic side, we are investigating better and alternate materials for electrodes and insulation that will minimize the corrosion and delamination problem. On the biotic side, we are using therapeutic and pharmacological approaches to reduce the inflammatory reactions and oxidative stress that occur after an electrode implant. 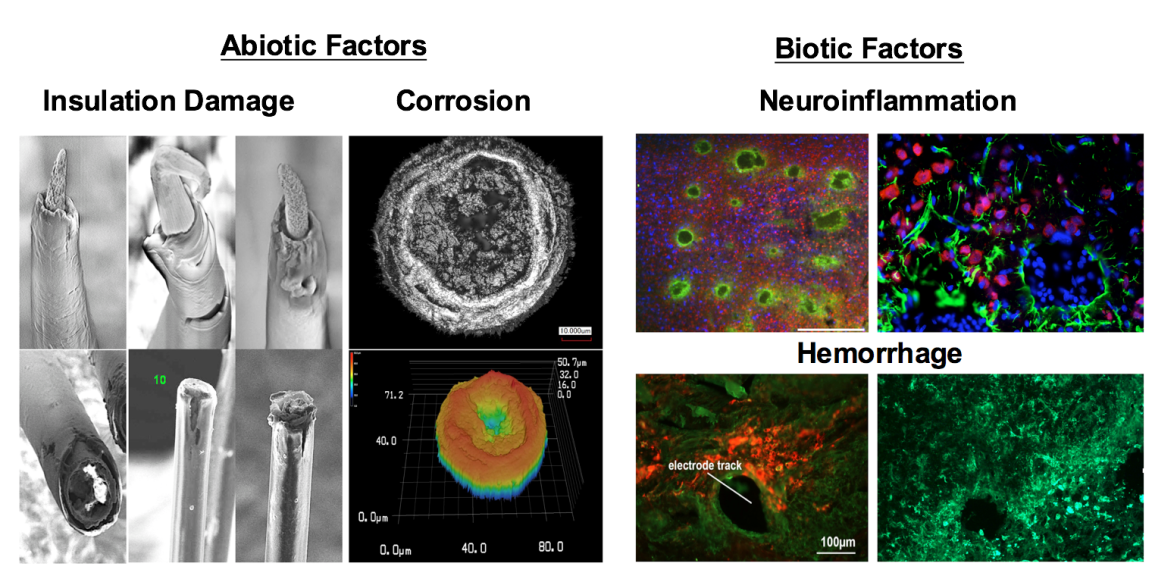 Neuroprosthetic technologies require a reliable neural interface that allows recording of high quality neuronal recordings for long periods of time. However, intracortical electrodes implanted chronically in the brain tissue are affected by multiple factors and a complex time-varying interaction of these factors (mechanical, material, electrical, and biological) lead to temporal degradation in the recorded signal. Electrode-implant induced injury leads to a series of events that includes strain and blood-brain barrier (BBB) and cell-membrane disruption. The BBB provides a physical and metabolic barrier in the brain that regulates cerebral homeostasis while protecting the central nervous system (CNS) from pathogens and toxic compounds. The damage leads to multiple biochemical cascades responsible for neuronal dysfunction and degeneration. Among these pathways, BBB disruption is one of the most dominant pathways resulting in hemorrhage, edema, ischemia, microglial activation, and the release of pro-inflammatory neurotoxic cytokines and has been indicated as key determinant affecting the chronic electrode-tissue interface stability. A BBB breach results in the infiltration of neurotoxic factors and pro-inflammatory myeloid cells and reactive oxygen and nitrogen species leading to oxidative stress in the local tissue around the electrode sites.Throgh these studies, we seek to understand and characterize the physiological events that occur at the electrode-tissue interface that leads to BBB-disruption and dysfunction, neuroinflammation, and oxidative stress. 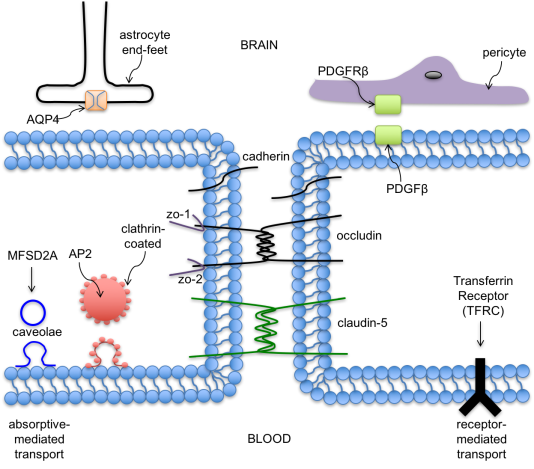 Brain machine interfaces (BMIs) restore communication and control in individuals with paralysis or injuries to the nervous system. Generally, invasive BMIs use single neurons or neuronal population activity, local field potentials (LFPs), and electrocorticography (ECoG) signals as control signals. Our lab is investigating alternate sources for extracting neural control signals in the central nervous system, ways to incorporate information from more structures involved in motor processing in the controller architecture, and design better modeling architectures for decoding neural activity. We seek to develop a neural interface, spinal cord machine interface (SCMI), that can be used for neuroprosthetic applications and serve as a new platform to test novel neural devices. Through these studies, we also seek to understand the underlying neurophysiology of the spinal motor circuits during learned behaviors. 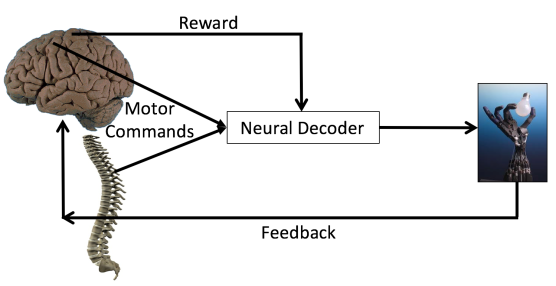 Brain-Machine Interfaces (BMIs) aim to restore function to those living with paralysis. At the core of the BMI is the decoder, which translates the neural signal into executable actions. One of the limitations of present decoders in its applications to activities of daily living is getting a supervised error signal to control the manipulator smoothly. In our recent work, we have developed an alternative BMI framework based on an actor-critic Reinforcement Learning (RL) paradigm that eliminates the need for a supervised error signal. The Actor-Critic RL has two components: Actor, driven by the primary motor cortex (MI) which decides on an action based on a fully connected neural network and the Critic, driven by the nucleus accumbens (NAcc), which gives an evaluative feedback on the action taken. However, in this framework the Critic is a limiting factor to the overall system performance since it is driven by a biological source: reward signals extracted from NAcc that code for multiple rewards. Our current works seeks to reduce the non-stationarities in the biological feedback so that it can be incorporated reliably in the BMI decoder architecture. 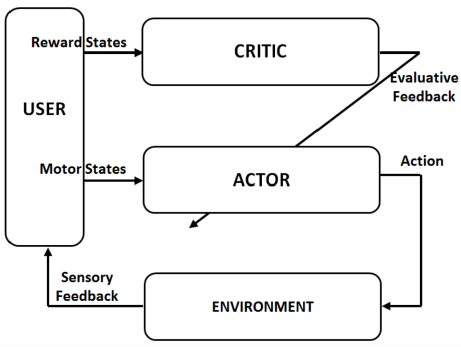 In the United States, there are over 33,000 people living with complete tetraplegia due to a traumatic spinal cord injury (SCI). Restoration of hand and arm function is ranked as the highest priority for people living with complete tetraplegia, because it would offer greater independence and improved quality of life. Activation of paralyzed hand muscles by functional electrical stimulation (FES) has been shown to restore control following complete spinal cord injury (SCI). A variety of control signals have been used, but most require head or arm movements, which may interfere with activities of daily living. Alternatively, natural signals from the brain can be used for control. In this study, subjects with chronic (>1 year post-injury) C5/C6 motor-complete SCI are control a brain-controlled functional electrical stimulation system for grasp and release. Through these studies, we seek to create a BCI-FES as an assistive system for tetraplegics and study neuroplastic changes that may occur during BCI usage.